Camellia in the Light

I got home from my surgery yesterday morning and was doing well.  As the day went on, I started having some intense burning pain, so I wasn't at my computer much.  This AM I hurt but not as bad as yesterday, so let's hope it stays that way.

Donnie is so good to me.  I asked him to take me for a short drive so I'd be distracted from the pain and could let the sun and autumn colors perk me up a bit.  He was happy to go out with me and my camera for a few.  Here are some pics along the way.

My daily was taken in my yard.  The flower is a sassanqua camellia.

The barn and the Bradford Pear on John Adams:

It was pretty windy, so unfortunately there was some movement in the tree branches and leaves on this tonemapped version.

From the red maple in my yard:

The colors are just amazing right now.  I am sure I'm going to ask to go for another drive today:-)
Posted by Maryann Miller at 8:10 AM No comments:

More from the Eno River


Although not obvious from this shot, you're looking at West Point Mill on the Eno at City Park in Durham, NC.  I like the blue sky and autumn colors and the 'barn' in the background.  I've included a few more shots below taken on our walk there on Wednesday. SmugMug Link
Posted by Maryann Miller at 10:16 AM No comments:

View of the Eno River

Between presurgery appointments yesterday, I was lucky to get in a few shots first outside of Durham Regional Hospital and then over at Eno River City Park.

My daily shot was taken on the relatively new pedestrian bridge that leads into the park looking down the Eno River toward the dam.  Donnie says to tell you that although beautiful in person my photo is much more beautiful than it actually was.  Thank Photomatix for that!

Here's a shot showing the bridge from the side:

Here are two shots from outside the hospital that I'll share too and then tomorrow I have another shot on the Eno that I'd like to post.

Time to head out to my surgery.  Thanks for all your supportive comments over the last few weeks...
Posted by Maryann Miller at 6:09 AM No comments:

The Field and the Forest

As with so many of my photo ops, I go past a scene day after day for months or years studying it and then all of sudden one day I decide that 'today is the day!' and I pull over to try to get 'the' pic.  Such was the case today with the setting pictured in my daily photo.  I've studied that pine tree for quite some time and during all the seasons.  I've seen egrets along the edge of the pond.  I've seen sunsets overhead and misty fog behind.  But, today when I saw the autumn colors and pretty sun and it wasn't so cold or windy that I didn't want to get out of the car, I decided to park at the church parking lot nearby and walk over.  Also as is typical of many of my photo ops, I only had 10 minutes or so to invest in taking pictures.  I would like to have knocked on the property owner's front door and walked down closer to the pond, but I made due with a view pretty close to the road's edge.  It's higher there, and that allowed me to actually get the little, low on water, pond in the shot as well as the pine tree and forest.  At any point, I hope you enjoy the views from this location.  All the forest scenes were processed in Photomatix.

I'm off to my preop appointments today.  It's getting close...too close.
Posted by Maryann Miller at 6:48 AM No comments:

I was at the Garden Hut yesterday afternoon buying some 'hot' birdseed.  It works at my house to keep the squirrels away while allowing my song birds to eat.  Don't worry, the squirrels are well fed here, they are just discouraged from dining on my porch railing.  Right now, they are feasting on pumpkins out in the yard seeds and all.  One even was going in and out of a large hole in a pumpkin that he had chewed his way into.  Too cute!  Sorry I missed that photo op.

Anyway, this gazing globe was lit on fire by the sun and I fired off quite a few pics of it and thought I'd share with you today.  They had many Christmas decorations out, and I have at least one shot I want to post for a daily, but I'll restrain myself for another week or so:-)  Knee jerk reaction to B&W  yesterday with all this color?  Maybe...  I wish the shadow area on the left was entirely even.  I tried to fix it but could not.  I did tone down the glare spot on the upper right a bit.  I hope you can't tell.

A yard globe, also known as a gazing ball, lawn ball, garden ball, gazing globe, mirror ball, or chrome ball, is a mirrored sphere typically displayed atop a conical ceramic or wrought iron stand as a lawn ornament. Its size ranges from 2 to 22 inches in diameter, with the most popular gazing ball being about 12 inches (33 cm). Gazing balls were glass but can now be stainless steel, ceramic, or stained glass.
Unlike hanging friendship balls or witch balls that have a loop, gazing balls have a stem so they can securely sit in a stand. Larger sizes can be made, but may be difficult due to the weight of the blown glass.
Gazing balls originated in 13th century Venice where they were hand-blown by skilled Italian craftsmen.
King Ludwig II of Bavaria, sometimes referred to as Mad King Ludwig, adorned his Herrenchiemsee palace with lawn balls. Thereafter, they became a fixture of European gardens and are associated with Victorian era English gardens in particular.


Yesterday after I dropped the kids off at school, I drove down my favorite gravel (dirt?) road.  I stopped at the swampy spot, and as I was looking out over the area, this red-tailed hawk came and landed in the dead tree in front of me.  With the car window already down, I pointed up and was able to get a few shots of him before he flew.  This is cropped some.  Definitely red-tailed!

Further up the road, you can see the tobacco is gone and the fields have been plowed for their winter crop. And at the end of the road, the view of the old barn where they sometimes sell Christmas trees was looking very nice in the morning sun and with the autumn colored trees in the background.  This is a location I like to take pics of through the seasons.

SmugMug Link
Posted by Maryann Miller at 7:47 AM 1 comment:

The kids and I went to the Museum of Life and Science in Durham yesterday to check out their new Carolina Wonderland Express holiday train exhibition.  As we all know, trains appeal to big and small kids of all ages, and this large scale holiday model layout did just that.  The kids were fascinated by the comings and goings of the trains and the adults marveled at the the craftsmanship of the layout which was constructed of natural materials.  Johnny was delighted to see Thomas the Tank Engine on one of the tracks, and Joey was very interested in the model of the State Capital Building.  And, one of the staff members volunteered to take our picture, and I really like it! 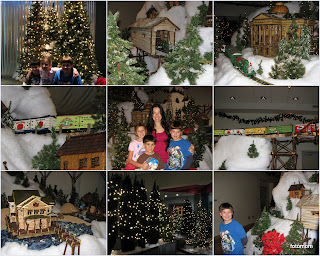 It might have been winterlike on the inside, but outside it was a gorgeous 60 degree Carolina Blue sky kindof a day.  Madi who is never camera shy gave me quite a few photo ops, but back at home I don't have a favorite that stands out to me with a wow this time:-(  I do like quite a few of the shots as fun snapshots, though including this series: 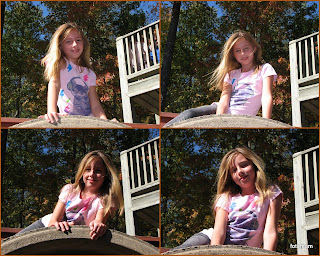 I also loved some of the shots with autumn color in the background: 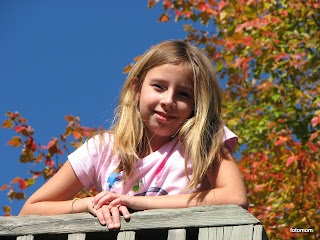 Did I mention that we LOVE Max?!? 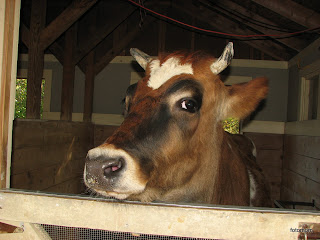 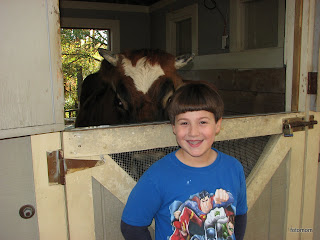 Everywhere I turned yesterday, the light and leaves were mixing together so beautifully. 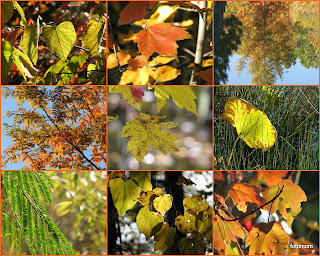 And, in the butterfly house, we had one of our best visits yet with all 3 kids getting to hold butterflies 2 or more times. Staff person Ron talked to us for a while and was a joy with the kids as well. 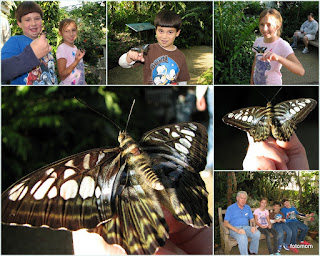 My daily is a B&W version of a picture of Johnny walking on the path in Catch the Wind.

I finally got my pics added to this blogpost by pulling them out of my Picasa album.  The .jpg method just would not work.
Posted by Maryann Miller at 7:17 AM No comments:

The kids and I spent the day together yesterday doing a variety of activities.  We started out at Home Depot to do their Kids Workshop craft with was a really cool photo frame.

Joey actually had a neat Christmas themed red, white, and green paint job, but I missed that picture:-(

After looking at some of their Christmas inflatables and decorations, I noticed some very pretty and unique orchids.  Have you ever seen a blue orchid before?  Surely it's some sort of new or dyed variety but appealing to me none-the-less.  I didn't get any tack sharp shots because of the low and fluorescent light, but I enjoyed them anyway.

I really enjoyed these other two shots taken at Home Depot too.  If you notice, Madi's legs are way too long to get in the car shopping cart.  Madi was hoping to get the Naughty and Nice cat stockings for her new cats Evan and Andrew.

The kids enjoyed going to the library and reading to Ruby and Casey  (dogs) too.  3 kids and 31 books later, we were on to our next stop!  Each of the kids read at least twice to both dogs.

Elf season will soon be upon us.  Some of you will remember from last year that we celebrate The Elf on the Shelf tradition times about 10 at our house.  Joey was so excited to see the Chick-fil-A cow in an elf hat.

We ended out our day by going to see Puss In Boots in 3D.  The kids and I thoroughly enjoyed it and were quite interested in seeing The Lorax coming out March 2012 after viewing the trailer.


Another busy day on tap today as we squeeze in hair cuts for the boys and a trip to the Durham Museum of Life and Science to see their new holiday train room The Wonderland Express.
Posted by Maryann Miller at 7:48 AM No comments: