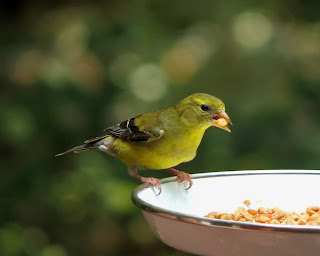 I'm very excited about the new bird feeder set-up that I have on my back deck rail outside my kitchen window. For a while, I put seed on a small glass plate that was just sitting on the rail. The birds and squirrels would knock it off often, and I was lazy about going down the steps to pick it up. Soon one plate fell on top of another and both were broken. I needed something that would stay on the rail and not cost a fortune. I got an idea to drill a hole in the rail and put a metal rod through some sort of plate and down through the hole. Something I could still bring in the house and wash but something that would have enough weight to stay put. My friend Don helped me pick out an old pot lid at the thrift store. The handle was held on by a screw, so it already had a hole in it. He drilled a hole in the deck rail and put a rod through the lid and wa la. I have this very inexpensive and totally practical bird feeder. No more seed just on the rail falling off on the ground. No more glass getting broken. It stays put very nicely now. And, I can easily get tired of this one in my photos and switch to a different color or size. I get so much enjoyment from those birds outside my window! Thanks, Don!

Here's a picture of an adult female cardinal and a fledgling from this year on the lid where you can see the rod: 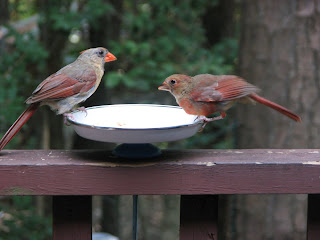 And here's one of a black-capped chickadee: 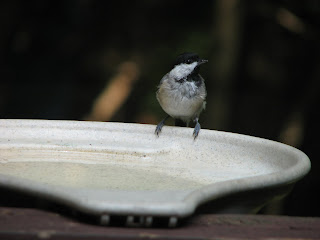 And one of a tufted titmouse: 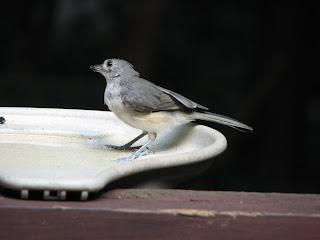 I also moved my hummingbird feeder to this deck and will be trying to get a shot worth being a POTD: 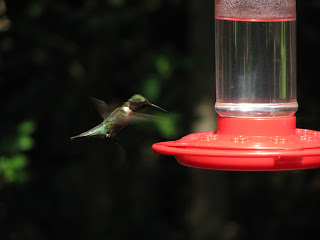 Today is Johnny's birthday. He's seven, and we're having a party for him at Marbles Kids Museum. Guess you can figure the theme of tomorrow's POTD:-)
Posted by Maryann Miller at 8:46 AM No comments:

If you weren't thinking about grilling out today, maybe you should:-) Of course, with the high temp here predicted to be 102 and hot temps in many other places, I can see why you might enjoy cooking in the AC too. Chicken with an Italian style marinade. The boys ate them right up! However, they mostly passed on this wonderful side dish that I also offered: The complete meal start to finish:

This is the link where I got the idea for the side dish.  My boys prefer squash, and I added corn and used yellow rice cooked separately.  I also had plain diced tomatoes on hand so put in some minced garlic and some oregano and Nature's Own Seasoning and then a bit of balsamic vinaigrette dressing at the very end.
Posted by Maryann Miller at 9:43 AM No comments: Imagine my surprise while during supper prep tonight this male summer tanager showed up at my bird feeder and bath. I've seen these birds around sometimes but never up close near the house like this. I think he was determined to chase off the cardinal fledgling:

no matter what but the cardinal really held it's ground for a while. Notice the feathers on the cardinal fledgling really starting to take on more of a red tint now. Quite a change over the last 6 weeks.

Posting late because I didn't take any pics yesterday and was so busy with work and the boys being tracked that I had trouble taking pics and doing anything with them today too. Thank goodness I finally got a few minutes with the camera around dinnertime.

The memorial service went as good as those things can go. I saw some of dad's friends that I hadn't seen for 20+ years. It was very good to see them.

Maybe tomorrow will be a 'normal' day for me. I don't count on it these days, though.
Posted by Maryann Miller at 10:16 PM No comments:

Just something fun for today. Joey asked for his mom's special pancakes yesterday:-) Whole wheat with oat bran, flax seed, and dried blueberries. Add in some kielbasa, and you get a happy kid.

We were back at Chick-fil-A last night:

I loved the interaction this little girl was having with the cow.  She did finally sit in his lap for a picture with her mom's help:-)

Johnny of course asked to be stuffed in the garbage can:-)

Posted by Maryann Miller at 7:59 AM No comments:

A plant growing in one of the small ornamental ponds in my yard. I liked the lines in the leaves in the background with the pretty purple in front and sat there for about 10 minutes waiting for the sun to move around a bit so I could line things up the way I wanted. 25 shots later:-) I'm lucky to have this plant flowering as it does not get quite as much sun as it would probably like.

I also got a nice shot of a goldfinch on my deck rail yesterday. I was very surprised to see him show up as I haven't seen many goldfinch since winter.

Johnny standing beside the flamingo garden flag that Carole sent us:

Both cute!
Posted by Maryann Miller at 9:15 AM No comments:

This is how I feel about the start of a new work week:-)

I tried to take a good picture of my 'paper' lanterns last night:

I just didn't get one that I liked, so I started down a path trying several different things in pp. I guess I like this one the best...hard to pick because none wow'ed me.

The kids and the tacos we had last night for dinner may be more interesting:-)

I'm very glad Joey and Johnny are back home now. Madi is too!
Posted by Maryann Miller at 9:49 AM No comments:

Cruisin on a Sunny Afternoon

I was actually thinking:

Thanks to the Kidd Family for a good time at the pool with friends yesterday. This is of course Madi having a blast in her pool. Her Poppop Norman got the cruiser for her. We'll pretend she's a real speed demon on it. 8 D cells don't rev up quite that much, though;-)

The boys will be home this afternoon. Woo hoo! Madi and I are ready!
Posted by Maryann Miller at 1:55 PM No comments: