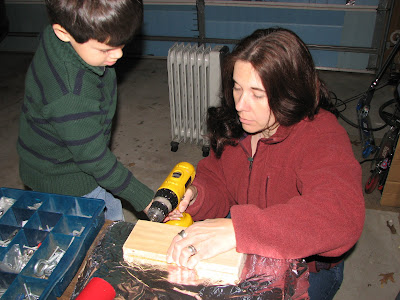 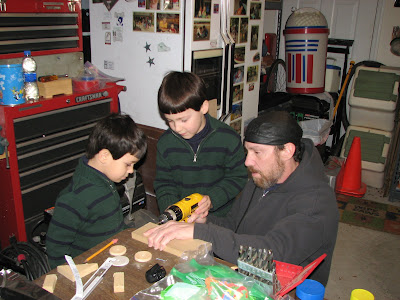 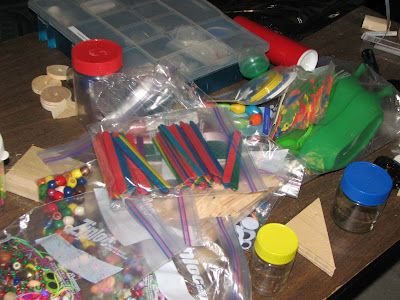 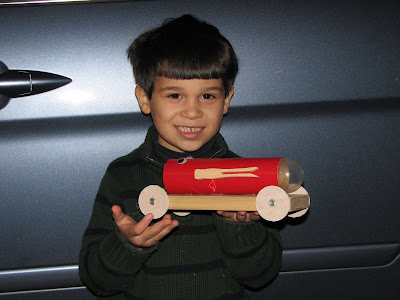 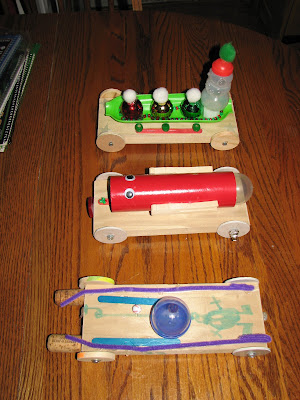 Joey asked earlier in the week if he could make another race car. We decided Friday night would be a good time to do it. It would give Rick enough time to cut out the body and wheels of the cars and me enough time to pull together some decorating supplies. And, we could all do it together.

Joey kept talking about it, asking if it was time yet...just very excited.

Finally, it was time! We tried to follow the body and wheel construction just like we did at the Gravity Racter workshop that we went to at the Museum of Life and Science in Durham two weekends ago. Steve Gerberich did a great showing us how to do the wheels and motivating the kids at the workshop.

Johnny decided he wanted to make McQueen and went straight for the red tube which I had included in with the 'stuff' not realizing how vital it would be for his car. I helped him decide that mounting it horizontal was the way to go. He picked the clothes pins as lightning stripes on the side and even glued on McQueen's eyes. There's a red popsicle stick and a green fan-shaped bead coming out the front, and per Johnny, that is McQueen's engine:-)

Joey decided on a blue bowling ball car. He was more into drawing than gluing today. He did add a cockpit and some fire (corks) coming out the back of the car.

Mom built a snow mobile car. I guess I'm just not happy that the holidays are over, and it ended up looking like a Christmas ornament. I was going for looks. It won't win any races sticking up so high.

I guess Joey's was fastest, but hard to truly tell.

We all had a good time, and Joey only slightly burned his fingers on the hot glue a few times;-)

I have a feeling more of these machines are in our future.

The rest of the pics including all the drilling and gluing are here.

Posted by Maryann Miller at 10:09 PM No comments: 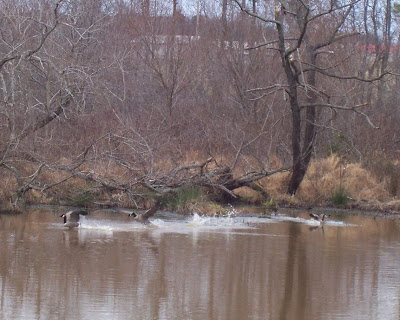 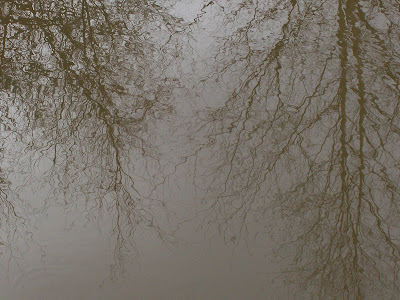 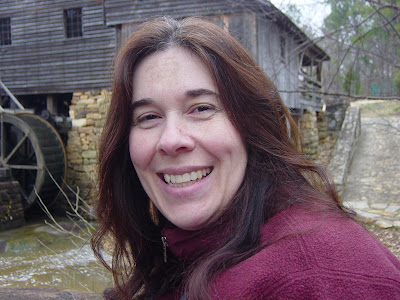 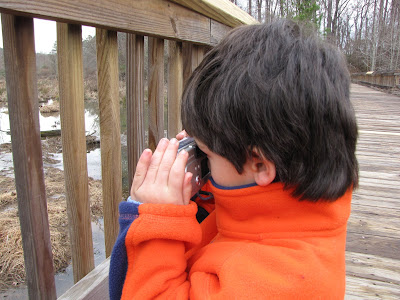 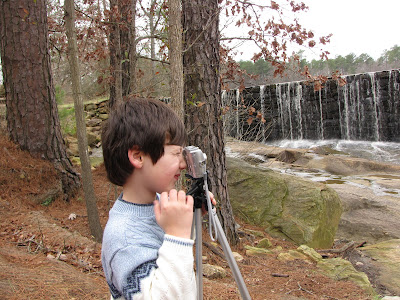 I wish I'd taken Joey's and Johnny's cameras with us yesterday to the museum. However, I was pretty busy taking my own shots, so it probably was just as well we didn't take them.

On the way home from the museum yesterday, we went into Guardian Angel where I found a cheap, new, lightweight tripod. I'd been thinking of getting one anyway, and this one was perfect for possibly just leaving in the car all the time. Joey immediately wanted to claim it as his and got excited about trying his camera on it. That's what happens to us mom's, right? Our kids like OUR stuff. I can share...

The colder and wetter weather came in later today than they thought last night, so we were able to get in a trip to Yates Mill Pond and Lake Wheeler today. It was 55 and cloudy but not raining or windy. Joey was so excited to take his camera and the tripod!

I really tried to focus more on helping the kids and capturing the kids having fun with their cameras than taking great pictures myself. However, once I came upon the 'face' piece of wood, I kindof got roped in. My creative juices got turned on with that. Also, I took the new camera...first 200 pics with it. I had to think just a tad when changing settings.

So, the new camera is a Cannon Powershot SX10IS with a 20X optical and 36 times digital zoom and 10MP but otherwise just like my Cannon Powershot S3. There are a few button and menu changes which I'd read up on and was mostly ready for. I was up and using the new camera pretty easy. At the museum yesterday, I was just too chicken I'd miss a shot due to the change, so I didn't take it. I'm glad I'm over the hump of using the new camera for the first time. Give me a month or two, and maybe I will ease up on treating it like it's a fine piece of china. For now, the old camera is relegated to trips out in canoe and the like:-)

Now, it was a very cloudy day, so it was hard to get any stellar shots, but we all took our share of pictures anyway.

Joey asked on the way over to Yates Mill Pond what would happen if he dropped his camera in the pond. I told him it would be lost for forever. He asked me if somehow I couldn't get it out. I said probably not but that there would be no reason to even try because the water would make it not work anymore anyway. He was being serious and concerned. We talked about putting the strap around his wrist and holding on tight and being respectful and serious when using his camera (and not running and laughing and clowing around with it). All was good. We had a plan.

Unbeknownst to me, Johnny had overheard this, and when he realized HIS camera was on the Yates Mill Pond bridge with us, he burst into tears, curled his lips...whole nine yards. He was PETRIFIED he'd drop his camera in the water. Now, I couldn't very well tell him his camera was worth less than $20 and that I wanted to get him a better one anyway. To him, it was a valuable as one of my pieces of gold jewelry. I showed him how to use the strap and told him if an accident happened while he was being careful that we'd get him a new one. "At Wal-Mart?" he asked from underneath his long eyelashes. "Yes, at Wal-Mart." So, I did get him to take a few pics especially when we were away from the water or through the bridge railing.

Joey took a nice tree water reflection shot and caught geese complaining at each other and splashing about but he was not on telephoto. Most important, he had fun.

So, Yates Mill Pond is having a photo contest. Submissions are due by February 1. Kids can enter too. I'm hoping to submit a few things from me and something from Joey or Johnny. There are two categories: the mill and park wildlife. Should be fun. I saw last year's entries, and they were very nice.

Ya know, you never can fully measure your efforts with a child until sometime after you've accidentally or purposefully shown them something. I remember Joey coming in from school one day complaining that the bus driver drove down Barber Bridge Road too fast; he couldn't see any deer out the window. I smiled knowing he was trying to spot deer along the road like we've taken a drive at sunset to do many times. Today was another one of those days. I found him telling me that he no longer wanted to be an inventer. He now wants to be a photographer like his mom. I told him he would change his mind another 100 times or more before he finally decided. And, by the way, that's normal. I also told him mom isn't really a photographer. You can understand why he's confused since I've taken 70K pictures in his lifetime. I have a computer 'desk' job. But really, I told him I hoped he'd always have a love of photography even if it just turns out to be a hobby and something we can enjoy talking about together.

Meanwhile, Johnny came home and continued to take pics in the comfort of his home far away from any threatening water:-)

The rest of today's pics are here:

Posted by Maryann Miller at 10:28 PM No comments: