A Visit With Aunt Debbie 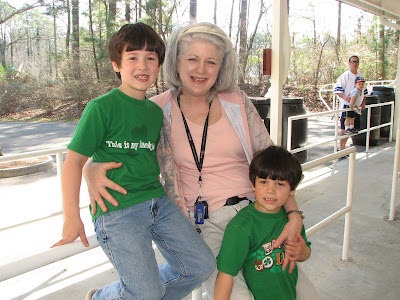 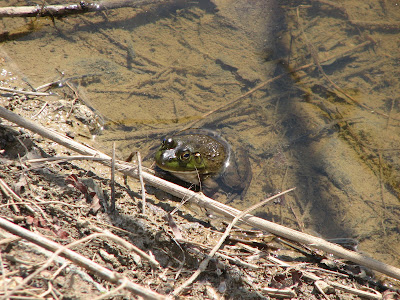 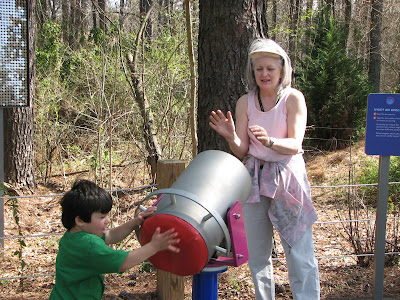 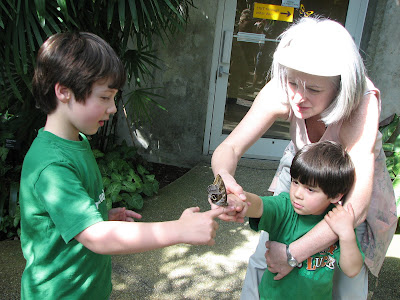 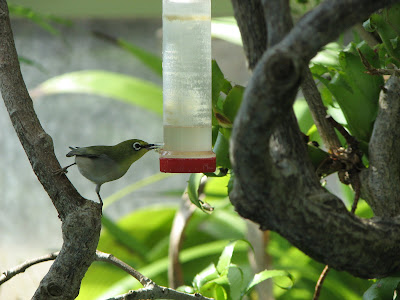 The boys and I made another visit to the Durham Museum of Life and Science today. We really like going on Sundays when the crowd is a little thinner. I called Debbie on Saturday to see if she could meet us there. We'd been talking about doing that for a while since she lives pretty close to there. As it worked out, she was free and agreed to meet us at noon. It was really good to see her, and the boys were very excited. We had our typical good time plus it was extra special to have Debbie with us.
We did our usual things in about the usual order. The boys showed Debbie their fireman pole skills. Then they showed her how to make, um, music:-) She joined in. We wandered through the farmyard. Joey thinks the donkey is just the greatest. Next it was time for the train. Two loops around and with the cheery conductor and joyful screams in the tunnel. The first dinosaur has been installed on the trail. The trail will open this summer. I started to say LATER this summer as in it being summer already. It sure did feel like summer today!
Of course my favorite thing besides just seeing the kids enjoying themselves and smiling is to walk the wetland boardwalk area. The turtles were out sunning themselves. We saw a Canada Goose and a Hooded Merganser pair looking for fish. The female Merganser caught and ate one near us for our viewing enjoyment. No Great Blue Heron today or hawk, but we still enjoyed the area.
We ran into Ranger Greg and chatted. He talked to us about the various frogs and frog sounds happening in the wetlands today. Plus, he showed us a snapping turtle. He also pointed out a spot where two nuthatches had built nest cavities in a dead tree limb but then had had the holes taken over by Carolina Chickadees. Unfortunately, no activity when we walked past. I keep hoping the Red-Bellied Woodpecker will be back in his hole. Ranger Greg said he hadn't seen him lately.
The boys had to have food at the cafe today. Hambergers it was. But, that made us a tad late for the butterfly release. Thankfully, a gentleman had one still on his hand and gave it to Joey who enjoyed it and passed it on to Johnny. It was another Owl Butterfly. Neat!
Probably the coolest thing in the butterfly house was this bird I got a picture of. What kind of bird is that anyway? Very cool how I caught him drinking. Is that water or nectar or what?
We made a second tour of the wetlands boardwalk after a visit to the gift shop and saying our goodbyes with Debbie. Mostly we enjoyed the bears. Gus, the only male of the 4 in the habitat rolled over on his back with his feet up in the air. Mr. Frisky! It was cute. We'll all have spring fever after this super pretty weekend.
On the way home, I noticed the moon over this barn on Holly Springs Rd. that I've stopped to take a picture of one time before and I turned around to go back and take a picture. This is the first time I've crossed the street to avoid the power lines and really get a good shot. Decent I think.
At any point, enjoy today's pics. The best are here. And, all of them are here.
Posted by Maryann Miller at 11:06 PM No comments: