A Meal Fit for a King

I had the pleasure of eating a meal with friends at Madi's house (the Kidd Family) last night. Let me tell you it was good! Steaks, okra, onions, and potatoes from the grill. A wonderful fresh salad. Fresh butter beans from Porters cooked with country ham. And, let's not forget carrot cake with mayonnaise, crushed pineapple, pecans, and fresh grated carrots. Oh, and the frosting has real cream cheese in it. Let's just say I'm not in any rush to eat any breakfast or maybe even any lunch today;-)

A man about ready to enjoy a steak!

Pretty candles for mood after dinner:

Posted by Maryann Miller at 10:54 AM No comments:

A Bud and His Friend 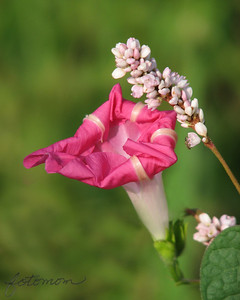 Taken on the edge of a tobacco field this morning:

Just me running late again today but I swear as of tomorrow I'm back on track;-)

Madi is such a good homework helper and reading buddy:

It's a book adapted from the Cars 2 movie.

The 'face' spiders are all over my yard. They have the coolest webs!

Last but not least the dragonfly that almost made my daily shot:

Posted by Maryann Miller at 10:48 AM No comments: Another late daily taken on the way home from dropping the kids off at school. This fence is pretty close to the road with a ditch and poison ivy:-( But, I got a few shots I liked, and this one was my favorite of the batch. Behind the fence is a beautiful grassy field.


Taken on the way home from dropping the kids off at school this morning. For some reason I have energy and the urge to clean and reorganize! Go figure!

Johnny had a major Lego achievement last night.  He completed the Tokyo International Circuit kit with 842 pieces.  For his accomplishment, I gave him the Flo's V8 Cafe kit with 517 pieces.  Way to go Johnny!

These two tiny butterflies tried to be my POTD today but just didn't make the cut.  Smaller than a quarter.  They were fluttering near the sidewalk as I left work (office bldg.) yesterday. Also on the way to the parking lot yesterday.  I was thinking time tunnels again...

Posted by Maryann Miller at 11:53 AM No comments:

Today's POTD didn't start out to be a spooky spider...really. I saw this cool web in my yard yesterday morning that was kindof in the sunlight. I grabbed my camera fast! I've seen this type of spider before. Harmless! A bit spooky I think! I did my best to get a sharp, bokeh pretty shot, but there just wasn't enough light for handheld. I ended up doing a B&W (tint) conversion and adding a bit of grain and going spooky to try to offset the movement in the shot. It's only 68 this morning, and the first signs of fall are just around the corner...

This may just be a Blue Jay fledgling trying to get some 'hair'! I also continue to monitor the cardinal fledglings. A shot I took at the Durham Museum of Life and Science on Saturday. When I'm not taking pics of the kids or special event activities, I'm always trying to squeeze in a few shots of the plants and animals. Maybe some sort of hibiscus? I just liked how incredibly wet the petals were. I measured 2" over the weekend in my rain gauge. Although I see temps forecast for just above 90 in the coming week, I do see the first turn in the weather leading us into fall. Michael's Craft Store had their harvest merchandise out front yesterday; cooler temps really can't be too far away.

My favorite shot from yesterday: Yes, I bought him the hat (at the thrift store).

The boys did follow-up electrical stuff at home yesterday too:

Posted by Maryann Miller at 8:01 AM No comments: Every time we go to the Museum of Life and Science in Durham, we have a good time. Typically we tend to go on special events days, and the extra activities going on do certainly add to our trip. Yesterday was Engineer's Day. Volunteers from IBM, Cisco, The Evironmental Protection Agency, and a few other organizations were there with all sorts of hands-on activities for the kids.

In the Mercury Room, the IBM volunteers had set up all sorts of learning stations. You could look inside a desktop and a PC and even take apart and put back together a mouse or keyboard. I joked with Johnny about mom's ThinkPad never being in pieces like the ones on the demo table. There were electronics kits from Snap Circuits including a Rover vehicle.

The kids could wrap up an egg and see if it could drop from 10' without breaking. There were scraps to design boats and then see if they would float and could handle weights on top of them without flipping or sinking. The kids tried to build the largest gumdrop tower out 9 candies and unlimited toothpicks. They even got to build a cardboard periscope. Tons of fun stuff, and the kids easily spent two hours going through the activities in there.

The main draw for Cisco were tablet based phone systems. For a kid that had never Skyped before, what a treat. But even though my kids had Skyped before, they were totally thrilled to be walking around with a mobile webcame device:

There was some convincing required to get them to move onto the next activity. Cisco had other interesting stations too, but the kids were stuck on the webcams.

There were several vendors from the TechShop and Fab Labs Carolinas with varying types of ShopBot and MakerBot devices. I really enjoyed seeing one of the MakerBots in action with it's glowing green laser cranking out various types of acrylic ornaments:

The kids learned about air flow resistance with a neat car ramp and some construction paper.

We even made an effort yesterday to watch the in-house car crash (seatbelt) demo system.

Like I said, we always enjoy the events at NCMLS and yesterday was another fine example of a great day up there.
Posted by Maryann Miller at 9:32 AM 1 comment: