I was out the door early this morning to take pictures and go yard saling. Mostly I just took pictures.

No picture trip this time of year would be complete without taking a few daisy pictures (usually on Barber Bridge Road). Below is my favorite of the day. 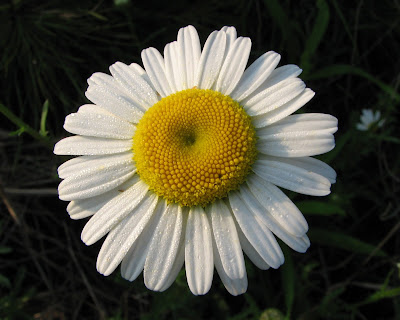 At the entrance of a new development on Old Stage Road, I saw this bird. I thought maybe a yellow-breasted chat, but now I don't think so. 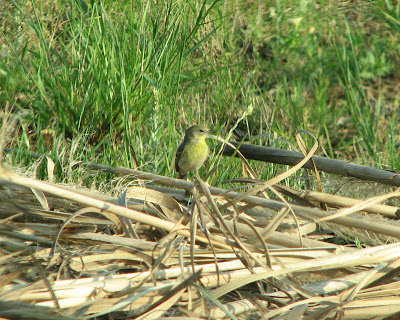 Just down the road a bit farther on Old Stage, there is an area near the new bridge with a bunch of dead trees. Not too surprising, I saw a lot of woodpeckers there. 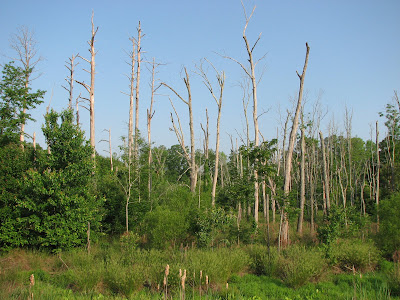 Now, I can't tell what the bird below is, but he was outside his nest hole then inside and then flying away. Look to your lower right in pic 2 below to see him flying upside down for a second. 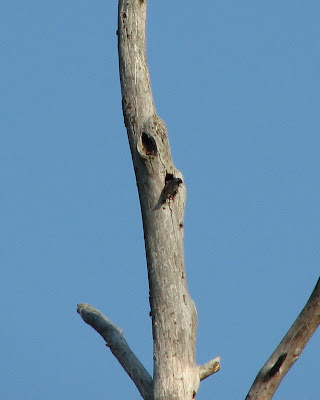 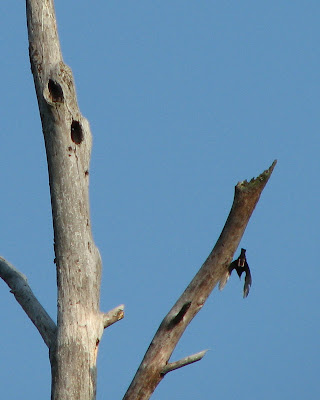 When I drove up to the bridge and got out, these 2 ducks flew off. I guess they are ducks... They aren't mallards, and I'm not sure. 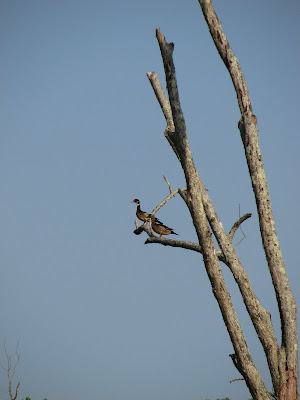 After a few minutes, one of them flew to a nearby tree limb where I was able to get a better picture. 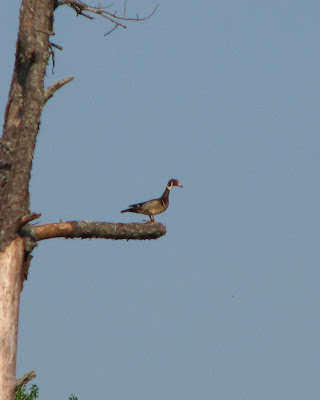 This is a red-headed woodpecker at his nest hole. 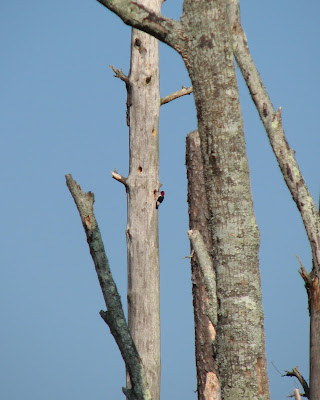 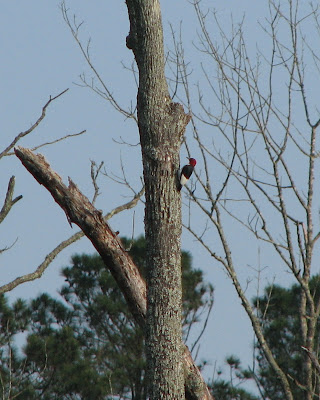 And, this is a northern flickr. In picture 2 below, the male is on the right/top. 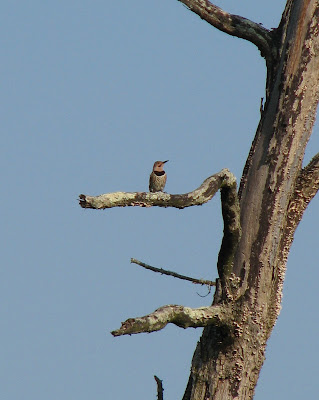 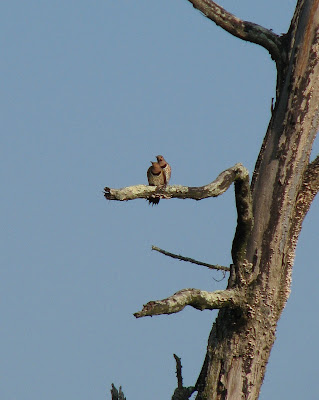 At a water spot in Fuquay, I saw the guy below which I believe is a great-crested flycatcher. 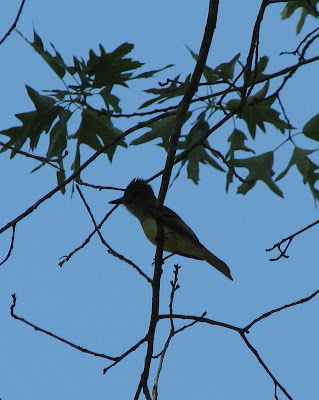 This northern cardinal was behind Clubworx in Fuquay. 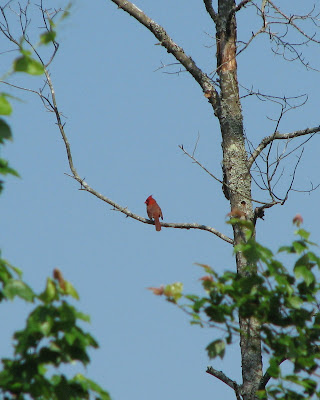 So was this downy woodpecker. 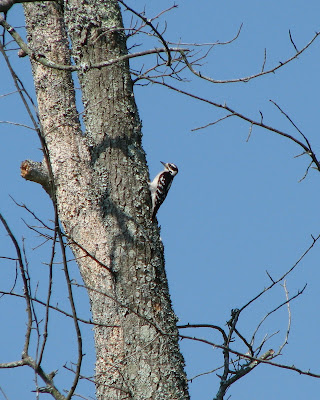 All in all, it was a good bird watching and picture taking morning. I'm always happy to get pictures of birds I've never seen or shot pictures of before.
All the pics from today are here.
Posted by Maryann Miller at 7:01 PM No comments:

I was very surprised this morning to see this opossum when I took Buddy out to his pen. I'd already taken Sugar and Honey out, and they were barking up a storm. I saw at least one more opossum on the ground in the branches below that tree, and my nextdoor neighbor reported seeing 3 opossums about 100ft. away from this spot in his yard this morning as well. I assume the same group. Very unusual to see them at 9AM. Usually I see them just after dark. 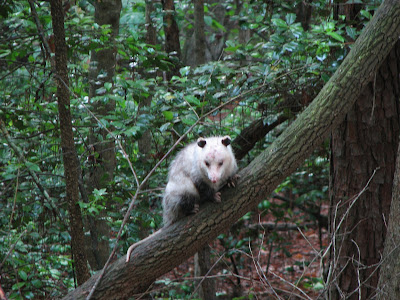 I drove Joey to school this morning, and we left early so we could take pictures on the way. 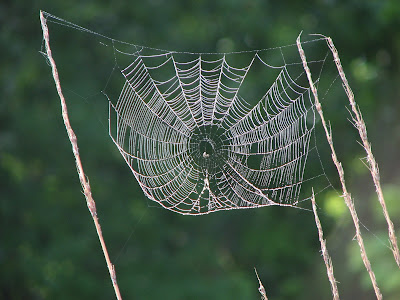 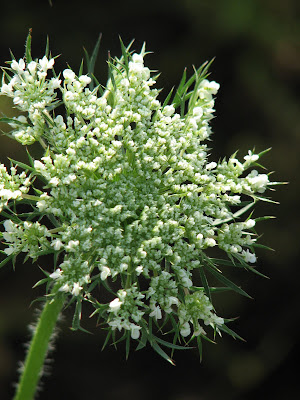 Then it was over to Barber Bridge Road to take Oxeye Daisy pictures. Today, I saw a white crab spider on the daisies. I found him fascinating and took bunches of pics of him trying to get a really good shot. Apparently, this spider does not build a web but instead lives on flowers and preys on the insects that visit the flower for food. This spider can change color/has color variations based on the type of flower it's living on too.
We had rain overnight, so the daisy petals glistened in the sun. 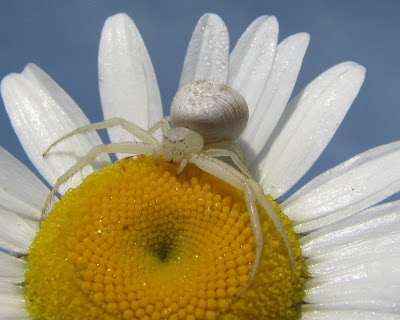 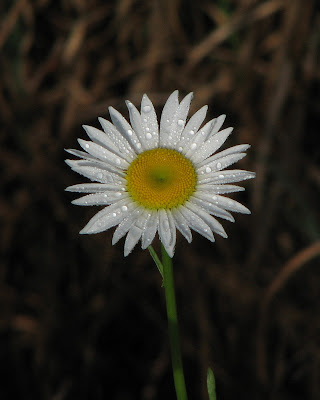 I hope to be back out taking more pictures tomorrow...Saturday morning.
The rest of the pics, and there are more, are here.
Posted by Maryann Miller at 5:30 PM 1 comment: 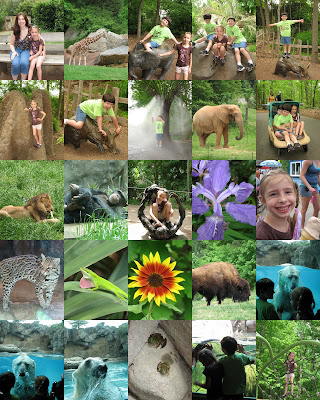 The boys and I went to the NC Zoo today with Madi. I'd been wanting to go back to the zoo for a few weeks now, so I'm glad we were able to make the trip today. The weather was iffy. It even sprinkled on us a few times on the way there, but after an initial sprinkle at the entrance, it was clear the rest of the day. Cloudy though, and that's a good thing 'cause the zoo can be too hot on a very sunny warm day.

We started on the Africa end and moved to North America...our usual route. The kids were REALLY interested in the bronze statues near the elephants:-) I could barely keep up with them posing...serious. Too cute!

We were especially pleased to see the lion awake for a change. We only saw the male. The female was not visible although Joey swore she was laying in the grass.

I had warned the kids to not fight over who could sit in the stroller. It's a 2-seater. Part of the time they compromised and took turns 2 riding and 1 walking. Joey decided it was easier to let Johnny sit on his lap. Madi let him sit on her lap some too. A few times they bickered, and I made all 3 of them walk. I still wanted the stroller to lean on;-)

Over in North America, we were just delighted by the animals that swam before us in front of their windows. The river otters have put on a good show most trips, but this time Willie the polar bear was awake and swimming too. What a delight!

We had our usual mid zoo ice cream break. Yum. We almost did the carousel this time, but it clouded up (?rain) and I decided to press forward to North America (it's at the midway point) instead of potentially wasting precious time waiting to ride.

I think one of my best pics today is the anole with his throat all puffed out, and he was a native zoo dweller and not in an exhibit!

So, we got there around 10:45 and left around 4:30. 5 ours is about right to see everything. The only thing we didn't do was go in the tropical plant 'house'. They had a special orchid show going on, but I just didn't feel like seeing tropical foliage today. More animals! (the kid kind included)

I'm probably leaving something out, but you get the gist. Ask the kids what they thought if you see them...

The rest of the pics are here.
Posted by Maryann Miller at 11:29 AM No comments: