We went to the community pool here in FL yesterday, and I took the Kodak Easy Share Sport C123 camera with us plus my regular camera. What fun that underwater camera is in the pool! I had a lot of fun taking pics and videos of the kids showing off their swimming talents. Here's one of the videos:

We also saw a giant swallowtail butterfly in the butterfly garden near the pool: Posted by Maryann Miller at 11:34 AM No comments:

I took this shot at Navarre Park yesterday. There was a great blue heron hiding in the vegetation and lots of other turtles and ducks too in their medium-sized pond.. I guess this is an Egret although he was smaller than I'm used to seeing. You'll appreciate that I circled the boardwalk around the pond several times trying to get the best picture of him and hoping the heron would come out in the open more.

The kids had a great time at the splash park there:

I stick built this collage in PSE 7.  Aren't they cute all wet and smiling?!?

And, I got a nice pano shot across the sound to the Navarre Beach area:

There was also a small butterfly house there:

I really like the center shot with the wet butterfly wings.  That butterfly was rescued shortly after the shot and went on to fly around.  The orange butterflies are Julias.  The black and yellow guys giant swallowtails.

We also went onto the Air Force base at Hurlburt Air Field in the morning and saw planes like this:

You can read more information on this plane here.

Johnny was thrilled to see the planes:

Posted by Maryann Miller at 8:44 AM No comments: 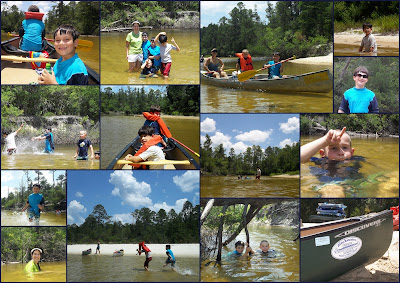 From Wikipedia:
A blackwater river is a river with a deep, slow-moving channel that flows through forested swamps and wetlands. As vegetation decays in the water, tannins are leached out, resulting in transparent, acidic water that is darkly stained, resembling tea or coffee. Most major blackwater rivers are in the Amazon River system and the Southern United States.

As you can see, the kids had a blast (and so did the moms). This river bottom is sand with some trees. There were lots of sandbars to stop on to get out and swim. The water was 2-3' in most places with just a few deeper spots. On a hot day, it felt great to just sit out in the water and cool off. The kids all took turns paddling in the front while the moms steered from the back. I guess we were on the water about 4 hours total mostly swimming and just hanging out. No critters on the trip except a few huge spiders on a tree trunk that were the size of my palm.

Most of these pics were taken with a new Kodak Easy Sport C123 that's a 12MP camera with a very fixed lens. It's waterproof to 10' (3m). In most shots it did a good job. I'm satisfied for the money with having it as a back-up water day camera. I also bought an Olympus X-560 waterproof camera. It was malfunctioning on the first use. It would lock up, and we'd have to pull the battery to get it back going. It did not leak water...yet. I like the Kodak better.

Posted by Maryann Miller at 10:12 AM No comments: 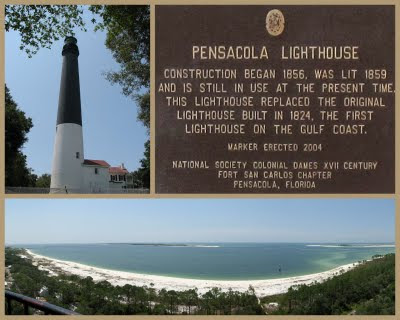 We went onto the Pensacola Naval Air Station base yesterday to see the Pensacola Lighthouse and the National Naval Aviation Museum and had a fantastic time. The two are virtually side-by-side. It's 177 steps to the top of the lighthouse, and all the kids made it without too much fuss. This lighthouse is still operational, so the mechanics of the lens were moving, and we had to be careful not to bump into it as we went out on the observation deck. The view out on the observation deck was awesome. The pano in this collage is a 14 shot stitch:-) That's the Santa Rosa sound out there best as I understand. Reminded me of Ocracoke where the ships pass through the channel on their way out to sea.

I borrowed my girlfriend Patricia's sign shot for this collage. Mine was too crooked to fix. Thanks! I wish the sign was a bit smaller real estate wise in this collage, but with the two other long shots that's just how it worked out.

Today it's going to be canoeing.

There's a pano of the other side here but unfortunately I missed part of two images and it has two bad seams:

I have a collage of my best lighthouse shots here: 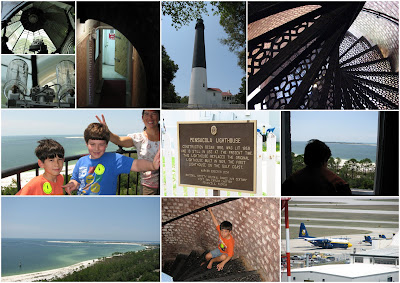 Near the red water towers you can see two of the Blue Angels planes and their Fat Albert support aircraft: 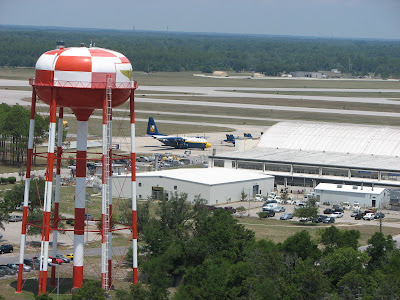 Black skimmers seen on the drive there: 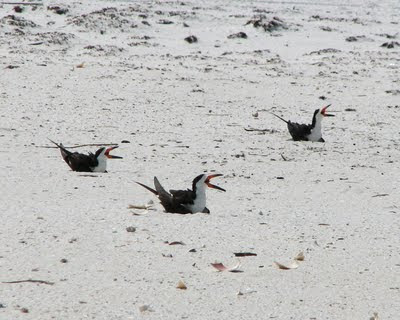 The National Naval Aviation Museum is celebrating 100 years of Naval Aviation, and the museum has recently doubled in size/exhibits. Wow! Hard to show you those shots in a collage, but one of the ones I liked are here: 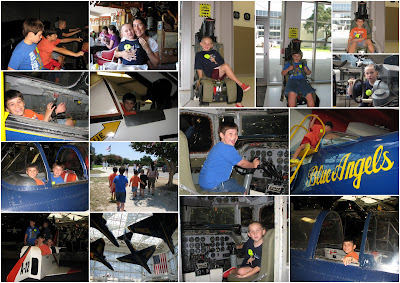 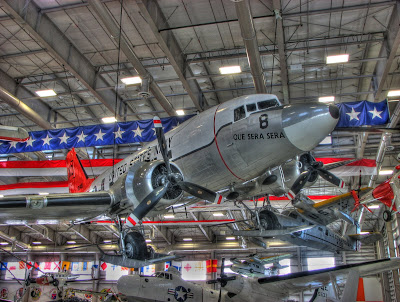 Posted by Maryann Miller at 6:12 PM No comments:

We had a great time on Navarre Beach yesterday afternoon in the white sand and merald green waters. The kids shared a few tubes and seemed to have a lot of fun with them. We made sandwiches on the beach and then moved a short ways to get ready for the fireworks display. Around 9PM they went off and continued for over 20 minutes. It was a very nice display and we had a good view, so I was able to get some nice fireworks shots.

I bought a Kodak Easy Sport underwater camera. Neat! I didn't get any great shots with it yet, but I'm working on it;-)

Pano coming onto the beach that really shows the emerald waters:

I think we're going to an aviation museum and the Pensacola Lighthouse today.

We're in Navarre, FL for the week. That's about 25 miles east of Pensacola. We're staying with our friends the Vollmer Family.

This is Johnny at the new terminal at RDU (Raleigh airport). We didn't have to get on the moving walkway but of course Johnny wanted to check out all the features of the airport. This trip is the first time Joey and Johnny were up in a commercial plane, and they did great.

A collage of more flight shots is here:

The front side of the backpack you ask? Lightning McQueen of course:-)

Have a safe and happy 4th of July!
Posted by Maryann Miller at 8:13 PM No comments: