The boys and I traveled to the NC Transportation Museum yesterday. We've been at least 4 times before, usually for Day Out with Thomas events, but this museum is always worth another visit.

Thomas wasn't there yesterday, but they did have some Thomas themed activities going on, and they had a firetruck show. I think the boys enjoyed the firetrucks almost as much as the trains.

Pictured here is a mural in town that caught my eye. 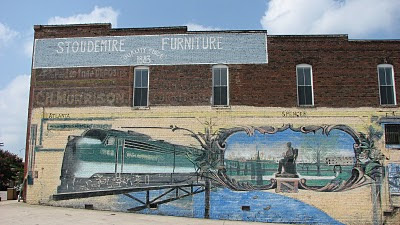 I found this view through the Pullman coach cars fascinating. At the time of this picture, the car was roped off, so that's why no people. 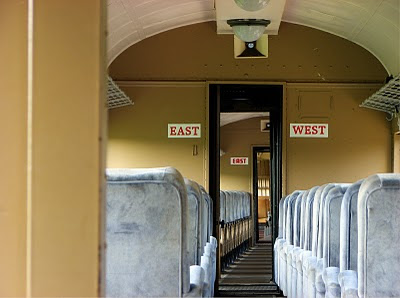 I thought this vintage photo of Spencer Shops was really interesting too. There are quite a few old photos enlarged and on display in various building at the museum, and I think they do a great job of portraying how things were at the shops 50, 100, and 150 years ago. 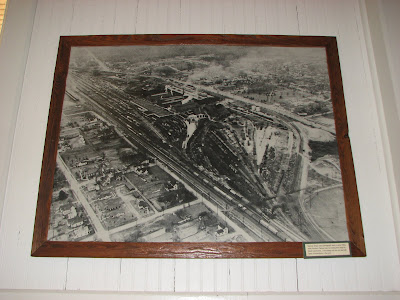 A shot I took while we were on the turntable. It moves pretty slow, but it's impressive how many bays this roundhouse has and just how many engines the turntable can move around. We saw it in action at the end of the day putting back the diesel engine that took us for our ride around the yard today.

The 37-bay Bob Julian Roundhouse, one of the largest ever constructed, was built in 1924 and is one of the few preserved roundhouses remaining in the country. The building houses about 40 restored locomotives and rail cars. 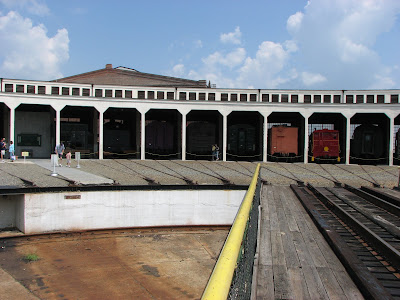 A close-up of the tracks at the roundhouse. 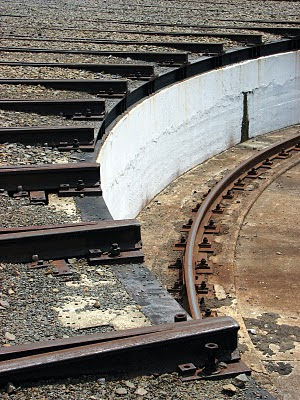 The wheels of the 544 Seaboard Airline steam locomotive. This engine greets you as you first walk into the Roundhouse. The large Decapod (an engine with 10 driving wheels) was originally built for Russian railroads, but a civil war there kept the engine in the United States. Because Russian rails have a broader gauge than U.S. rails, the engine was fitted with especially wide wheels to accommodate U.S. track. 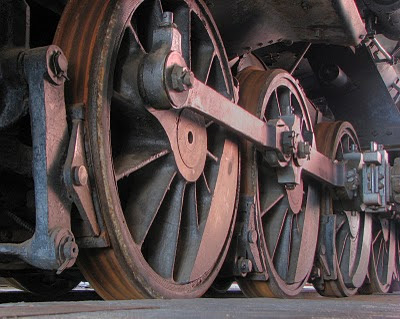 A close-up of engine 1925. This locomotive was built by the Lima Locomotive Works in February 1925. This Shay type of locomotive, named after the inventor, was designed for the steep grades, sharp curves and bad track conditions found on logging railroads. The Shay locomotives were different in that pistons were vertically mounted on the engineer’s side of the boiler, using connecting shafts and gears to turn the wheels. The 1925 was used by the Graham County RR to haul logs out of the Snowbird Mountains to the Bemis Lumber Company mill in Robbinsville, NC. The logging portion closed in 1948, but the railroad continued to carry general freight between Robbinsville and Topton, NC, where an interchange was made with the Southern Railway. Due to dropping freight levels and track conditions, the Graham County ceased operations in 1970. Restored in 1988. Currently out of service but scheduled for an overhaul. 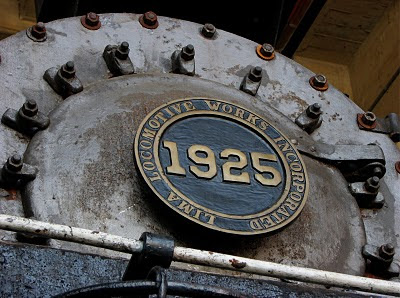 A view from our train ride around the yard. I liked the blur of color. 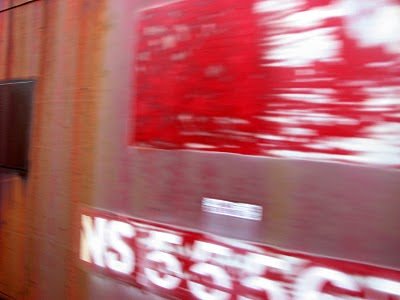 A view from inside the red caboose the boys spent so much time playing in in the Roundhouse. 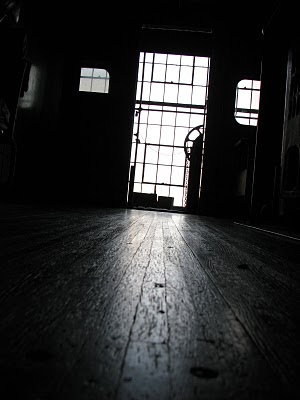 Windows in a room in the Roundhouse first used as a machine shop and later used as a locker room. 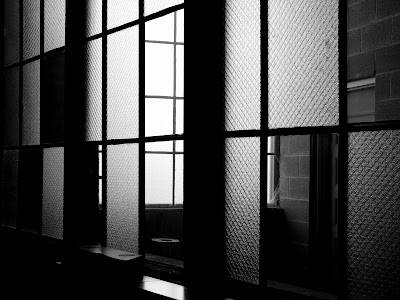 This locomotive was built by the Baldwin Locomotive works in June, 1913. This 4-6-0 Ten Wheeler was one of 25 ordered at that time by the ACL. These class of locomotives earned the nickname “Copperhead” because of the bright copper rings around the tops of the smokestacks. The ACL used them for freight and passenger service around Fayetteville, Rocky Mount and Wilmington in NC, and many places from Richmond, VA to Jacksonville, FL. The Atlantic Coast Line had their corporate headquarters in Wilmington, NC from 1900 until 1960, when it moved to Jacksonville, FL. It was the only Class 1 railroad to be headquartered in this state. As dieselization occurred, many of these locomotives found use on smaller subsidiary lines of the ACL. The 1031 was used on the East Carolina Railway in Tarboro, NC during the mid-1950s and the Virginia & Carolina Southern in Lumberton, NC during the later part of the decade. In 1959 it was placed on display in Florence, SC behind the passenger station adjacent to the rail yards. The City of Florence donated the 1031 to the NCTHC in 1994, resulting in a cosmetic restoration to a 1940s appearance in 1996 for display in the Robert Julian Roundhouse. 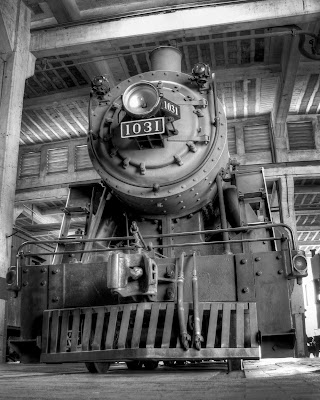 Last but not least, some shots of the boys enjoying the day.

Johnny is miffed here because we were in the air conditioned car for our train ride but I wanted to be in the one with open windows for pictures. We compromised and did the first half in the open window car and the 2nd half in the air car. I love the perturbed and hot face. It wasn't too hot for our trip, but we would have liked it cooler. I guess it was high 80s to low 90s. 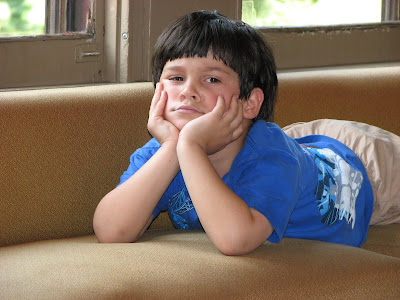 Just a sweet shot of the boys being close. Really, they are very loving siblings. 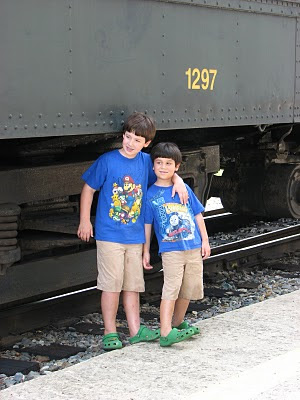 Many, many cute firetruck shots. The one upper row second from left with Joey wearing (sortof) the fireman hat is priceless. 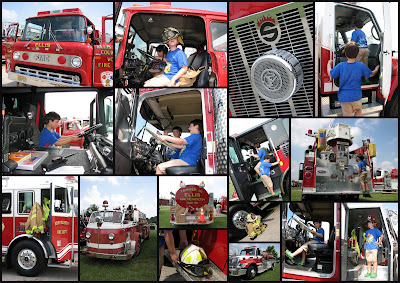 The boys even got to honk the horn:

and talk on the CB:

No trip anywhere is complete without at least a drive through the Chick-fil-A drive-thru. Here, we are in the CFA in Asheboro. I feel like I know this one as well as the one in Fuquay. We go in every time we go to Poppop's, the zoo, or elsewhere west of Raleigh. 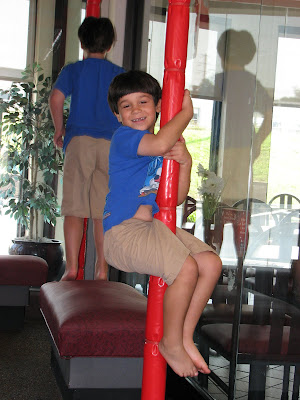 Many other pictures are here including a good number of vintage car shots and other train engines on display and even a glimpse at the train restoration shop.
Posted by Maryann Miller at 9:08 AM 1 comment: