The boys and I attended a Halloween party sponsored by IBM Friday night. We had a good time, and you can look at those pics here.

Today we hosted our annual Halloween party here at the house. Our neighborhood friends and a friend from preschool joined us. We did several crafts, ate lots of sweets, played bingo, did a pinata, baked sugar cookies, read books...you name it. I really apprecate everyone that came taking time to come have fun with us. The pics from today are here. 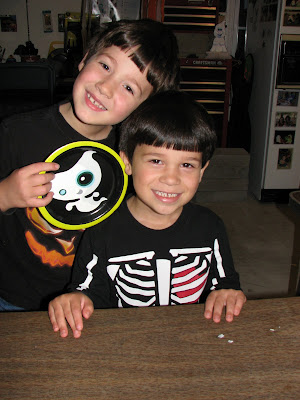 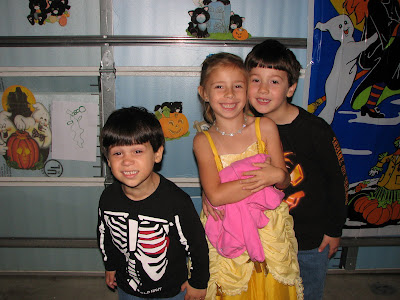 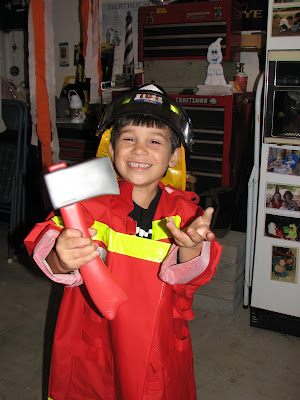 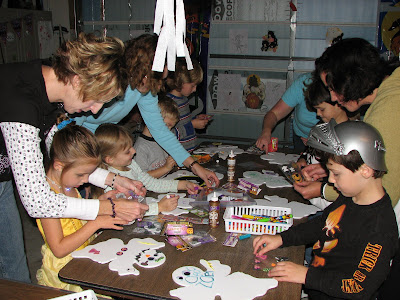 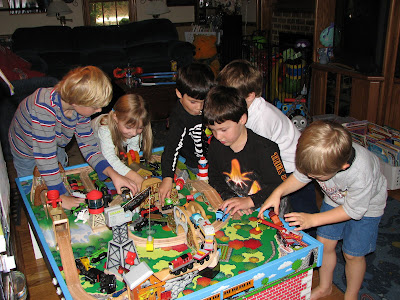 Posted by Maryann Miller at 5:56 PM No comments: 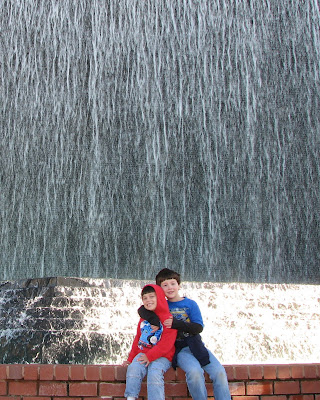 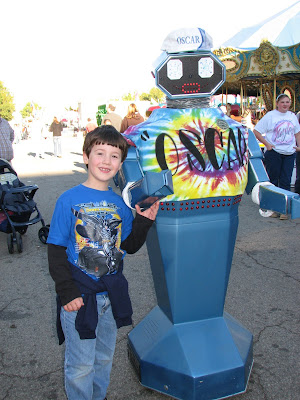 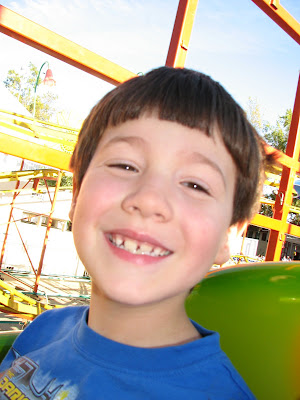 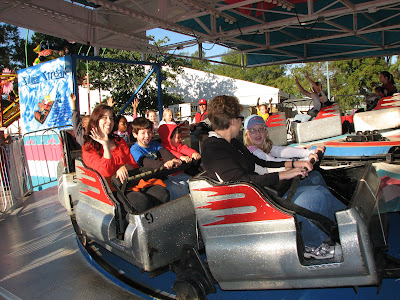 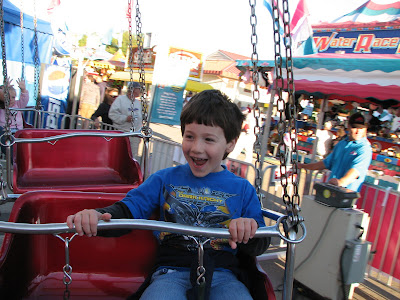 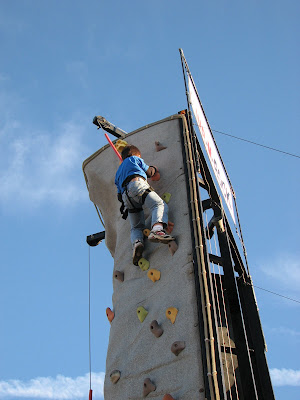 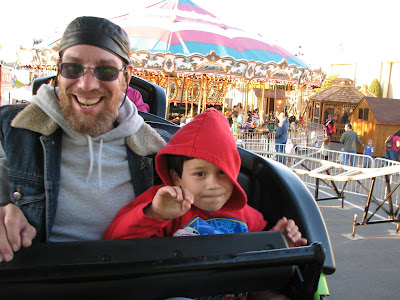 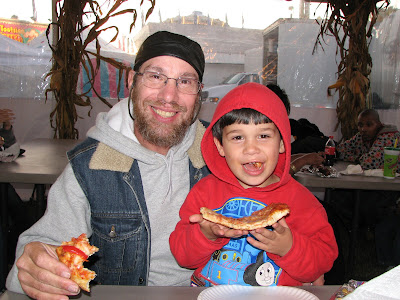 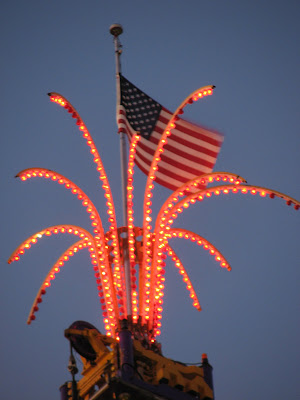 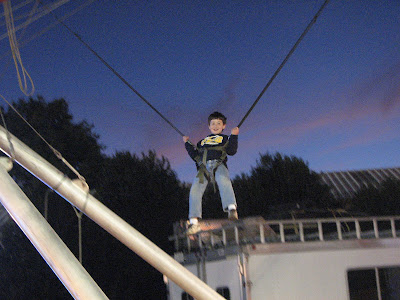 We went to the NC State Fair today. This is the 2nd time for me and the kids. I think it was Rick's first. We had a great time:-) We picked Joey up from school at 3:45PM and headed to the fairgrounds. We had a couple of hours of daylight and then a couple of hours of night. That's just right for me...time to see things and time to enjoy the lights on the Midway.
Since last year was great, nothing wrong with this year being nearly identical. If you rememer the layout last year, it's essentially the same this year.
We got our advance tickets scanned at the main entrance and then made our way to the waterfall to get our ride vouchers turned into tickets. I really do want to know why they cannot have more voucher tents. I think there is just the one, and they've centrally located it.
At any point, tickets in hand, Joey wanted to head straight for the caterpiller roller coaster:-) He remembered how much fun he'd had on it last year. Both boys faces absolutely lit up with delight as we zipped around the track in the coaster.
We did several other rides in what I'll call kiddieland. We did the circular Silver Streak, the funhouse, and the swings. Lots more smiles.
I asked the boys if they were hungry. NO! They just wanted more rides. We headed into the main midway area and came upon the rock climbing tower. Joey could not wait to try it out. Now, last year, he scaled it in no time flat with no hesitation. This time, he got ansy half way up, and the guy had him push off and come down so he would remember that if he slipped how much fun it was to come down the rope to the ground. He got a second chance, and this time he made it to the top...whew:-) We were all cheering him on, "Go Joey go! Go Joey go!" He told me afterward that he liked that:-)
We headed to this short track cobra rollercoaster. Short track means lots of fast starts and fast stops and jerky turns...no problem...just a lot of wear and tear on an older mom.
The boys did a pirate ship climb/slide with Rick that they really liked and another funhouse.
But, Joey and I did the white water log flume! Johnny was too short in this case to be allowed on although he wanted to go. (He'd have tried the rock climbing wall too, but you have to be 5.) The water track was high, and we did get wet, but it was a thrill for sure. We need that set up during the summer for the flea market so we have a place to cool off!
Time for food for sure. We ended up eating some really good pizza from John the Greek that had the quietest little eating area behind it of any spot in the fair. Nice! Good pizza too. Yes, the kids each ate one of those giant pieces of pizza. They had cheese. Rick and I had the works! We got yummy soft serve ice cream for dessert.
Then, it was on to another part of the main Midway. Joey wanted to do bumper cars, and Rick and Johnny tag teamed up to get him with their car.
There was this super cool bouncing 'thing' on ropes that the kids were just super excited to go on. Mom enjoyed trying to caputure a good picture despite super bright lights, being too far away, fast action in low light...you name it. But, I did manage to capture the moment including a video of each boy enjoying it. The harder the kids would bend their knees and push off the bouncing pad, the higher they went.
Joey would not go into the haunted house on the roller coaster track car. But, Rick and Johnny went and had fun. I wanted to go!
With just a few tickets left, we took a second turn on the caterpillar roller coaster, and then the boys did the water boats.
4 fun-filled hours of NC State Fair! Great!!! Now, if I can just stay awake tomorrow!
The rest of the pics are here.
Posted by Maryann Miller at 10:36 PM 1 comment: 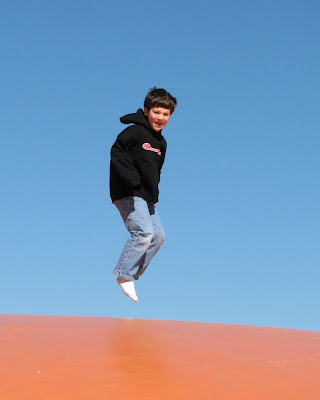 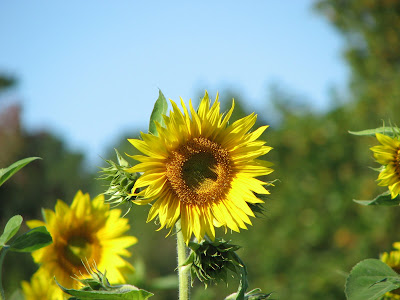 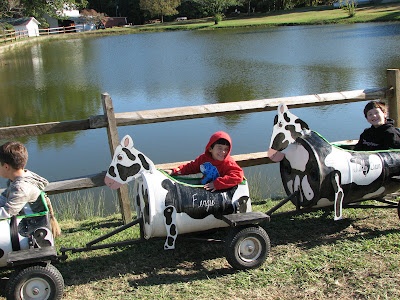 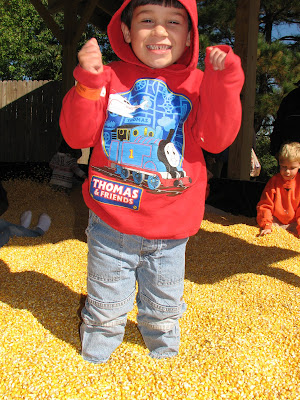 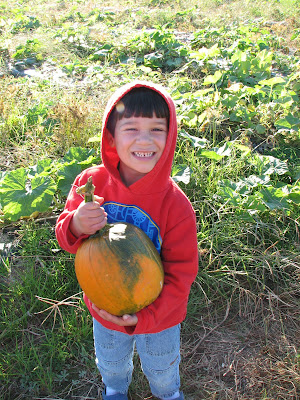 The boys and I made what is now our annual trip to The Vollmer Farm today. Last year we went on 10/14 and had a great time, so going again this year was an easy choice. Patricia and family found this place and let us know about how much fun it was after they went last year.

Anyway, all the things we loved last year we loved again this year. The boys were super excited and wanted to head for the bouncing pumpkin first. Then we were off to the corn sandbox where I think we spent the most time. The corn feels very relaxing... The kids enjoyed burying themselves and me.

We did the corn maze. It took us no time to find the 5 color stations this year. Joey's 'fortune' was 65. We did the pumpkin toss. Even Johnny was able to sling the 'pumpkin' a good ways after he learned and practiced on a few balls. We played on the playgrounds and did the 40'+ potato sack slide and the barrel crate cow train. It was just one fun thing after the other.

You would have thought that the kids were super tired at that point, but no, they were ready to go pick a pumpkin. We got 4 small or medium-sized ones, and they only came to $6.40! We were in the field for a good while walking around looking for the most interesting ones.

Definitely another successful fall season for us so far including our trip to Bunn where the farm is.

The rest of today's pics are here.
Posted by Maryann Miller at 8:26 PM No comments: