A Great Day at the Robot Rumble 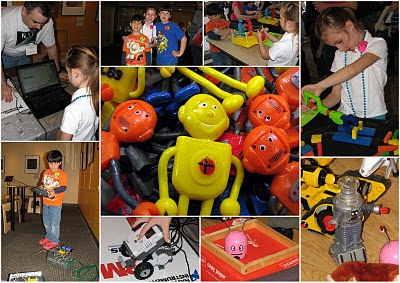 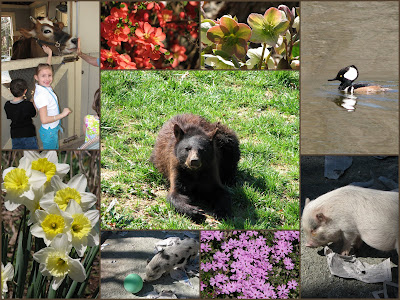 The kids and I just love special events at the Museum of Life and Science in Durham. Joey, Johnny, Madi and I went to the museum for the annual Robot Rumble today, and boy did we have a great time.

In the South Gallery, near the main lobby, there were quite a few Lego Mindstorm exhibits. The 537 Hedgehogs from Hillsborough were letting the kids make buttons, pick out a bendy robot man, and play with remote controlled robots. At another table, IBM?, they were showing the kids how to write Mindstorm robot programs, upload them to the robot, and then watch them in action. In this case, the programs were basic things like go straight, turn around, and come back. The kids also watched some older kids demonstrate more sophisticated programs where the robots used light or touch sensors to pick up loops on their 'hands' and navigate obstacle courses. Great stuff!

In the Mercury room behind the front lobby, robot battles were gong on, and other types of robots were on display. The kids enjoyed watching the battles and especially the 'What is a robot?' presentation. We learned that sometimes toys look like robots but are not really robots. The kids thought robots talked, moved, needed batteries, had a computer in them, etc. We got to see what was under the 'skin' of a Furbie, a toy Wall-E, a Lego Mindstorm standing robot, and even a toy version of the robot from Lost in Space. Very informative and fun!

Outside next to the butterfly house, several more exhibits were set up. In one 'pit', two robots battled each other. In another, a high speed robot on 4 wheels that could operate on either side was a thrill as it crashed into boards and flipped through the air. All my kids got a chance to operate that one. They also had a table with robot armlike tongs to give the kids a feeling for how robot arms work. There were even Rock'em Sock'em Robots for the kids to play with. We liked this area so much we had to come back for a second trip!

Last but not least for us today was the robot submarines from iRobot in the pool where the sailboats usually are in Catch the Wind. My kids didn't wait in line to use the sub remotes, but we did enjoy watching the other kids operate them. The subs would sometimes pop out of the water and put out a splash of water. Funny!

In other exciting news, there is a new tiny male pig named Auggie in with Miss Piggy. Boy was Auggie cute! Miss Piggy was putting on quite the show today too pushing her green ball around the pen!

We got to see Yona the new bear cub the museum took in as a rescue from off the side of I40 in Tennessee. We spoke with one of the keepers that told us that Yona is a year old. She's learned to kindof leave the other 4 bears in the bear habitat alone and is getting along fine with Gus, the youngest of the adults and the only male. The keeper threw in some apple halves, and we got to see Yona chomp down on that. The other bear in view today was Ursala.

I waited all winter to see and take a picture of a hood merganser, and today was the day! They even came pretty close to the boardwalk area.

We saw Ranger Greg on the boardwalk, and he pointed out a snake sunning itself on a tree branch. We were also amazed at the number of turtles up on logs in the wetlands sunning themselves.

We made a quick trip through the dinosaur trail and fossil pit as well as the inside animal room and taking a peek at the new Contraptions exhibit. But then, in what seemed like a blink of the eye, the day was over and it was time to head home.

5/22 is the Butterfly Bash and 6/12 is the Bubble Blitz, and we look forward to visiting the museum on those days too.

The best pics from today are in this album starting here.
Posted by Maryann Miller at 11:12 PM No comments: